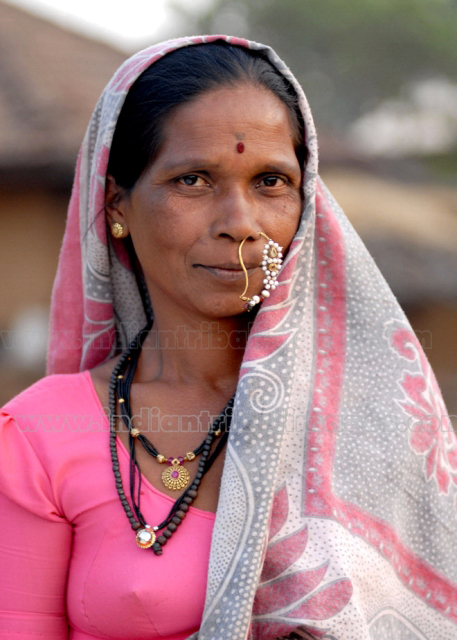 The Ornaments of this Koli dhor tribal woman are itself of unique style. Nose ring wear by her is age old tradition in Maharashtra. It is always made up of Gold as a base material and Pearl as part of design. Though it looks big but always light weighted. Earlier, only married women used to wear it. But now as a part of fashion and also adds beauty to your look unmarried women also wear it occasionally. A black bead necklace is always worn by married women. A bindi (tikka)on her forehead and simple tops-earring adds beauty to her look. This brown bead necklace is wear by men-women both. It is made out of basil wood. People who are not indulge into any type of meat eating wear this necklace. She is wearing a nine yard sari. To cover head with a sari is compulsory to a every married women. Though now this tradition is fading away. A bright color clothing is commonly seen in this tribe. About Koli Dhor Tribe - Koli Dhor is one of the oldest tribe of Maharashtra. They still have good number of population. Though modernization and development in Maharashtra displaced them from their native places, these tribes have preserved tradition by entering into the mainstream of modernity. Most of them are now landless but indulged into daily wage activities. Both men and work for livelihood.