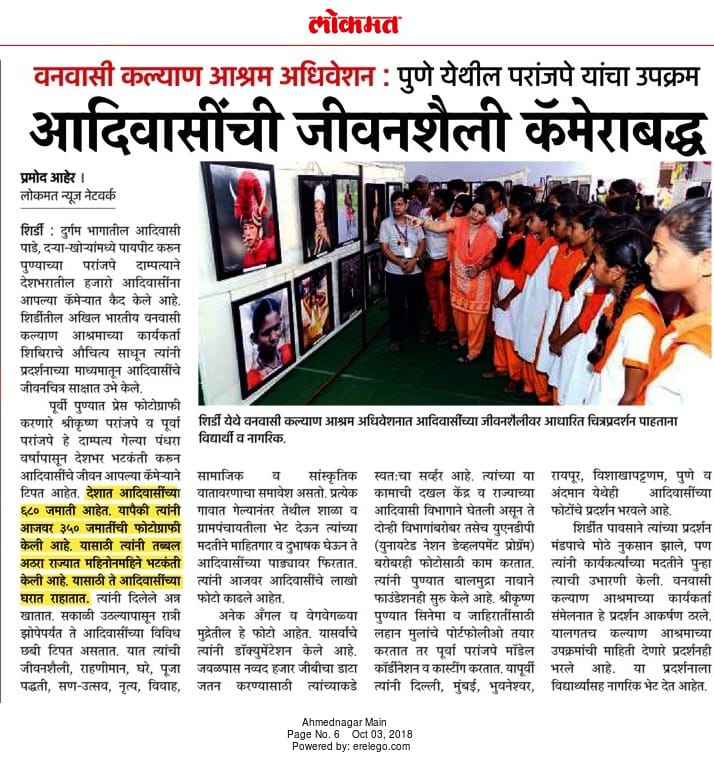 I Found my Passion for Photography when i was 22 . Since then i had worked as a photo journalist for over 20 years with reputed publications such as Times of India , Indian Express , Maharashtra Herald , Hindustan Times , Sakal etc . I am known for my endeavours in child photography through my unique exhibition titled ‘ Balmudra ‘(www.balmudra.com) . Since 15 years I have been helping parents capture beautiful moments of their child in a studio spread over 2000 sq ft and equipped with advance technology in Pune . About 10 years ago i was inspired by anthropologist from Pune to travel to several remote areas across the country and capture the livelihood of tribal community. I have traveled extensively in the tribal areas of Maharashtra , Gujrat , Madhya Pradesh , Rajasthan , Jharkhand , Nagaland , Chhattisgarh , Arunachal Pradesh , Odisha etc . I have captured more than 175 tribes in India having a collection of more than 5 lakh images . Over the years , I had successfully organized more than 15 exhibitions of tribal photography at Pune , Delhi, Mumbai , Nashik , Hyderbad , Kozhikode , Jaipur , Shirdi , Dapoli etc .

Chhattisgarh Tribal Research Institute appointed me to do a photo documentation of 5 Particularly Vulnerable Tribal Groups (PVTG ) in year 2016 ,namely Baiga , Abujmadia , Pahadi Korva , Kamar & Birhor . Afterwards last year in 2017 again Andhra Pradesh Tribal Development and Research Centre appointed me to do a photo documentation of 5 Particularly Vulnerable Tribal Groups (PVTG ) , namely Parengi Porja , Bodo Gadaba , Gutob Gadaba , Konda Savaras , & Kutia Khond . Currently I am working on more than 12 books based on the art , culture & livelihood of the Indian tribal community . I have worked for UNDP INDIA .  In 2016 my documentation work  has been published by UNDP & Ministry of Tribal Affairs in the form of Diary  titled Tribal Faces In India  . Many of my Photos of Maharashtra Tribes are displayed in PUNE TRIBAL MUSUEUM. After spending time in the Tribal areas and befriending them, i realized their plight and understood their needs . In the wake of helping tribes and tribal children myself along with my wife Poorva  Paranjpe has founded an NGO named Balmudra Development and Research Centre ( BDRC ) . Our Ngo got 12A and 80 G certification too .The NGO conducts exhibition with the title ” Tribal India : A Photographic Journey ” every year .

If you wish to support us with your contributions we accept payments by cash or cheques by the name of BALMUDRA DEVELOPMENT and RESEARCH CENTRE . You can also deposit the amount in A/C 60104978189 , IFSC code MAHB 0000158 , Bank of Maharashtra Parvati branch Pune .We can avail the benefit to you as we have 12A and 80 g certificates.

About my Tribal Photography Exhibitions https://www.youtube.com/watch?v=IXWVp2lhtIo

Meet your own blood-brothers and sisters you have never met before!

This exhibition is the world’s first ever comprehensive photographic documentation of the ancient tribal civilization of India.

It aims to create genuine awareness, a sense of wonder and a feeling of belonging to our fellow tribal citizens – brothers and sisters who we share the country with, but have never been introduced to.

For almost 99% of visitors this exhibition has been their first visual interaction with the incredibly diverse and rich societal fabric of our country.

An outcome of more than 50000 kms journey, visits to the remotest (and often dangerous) areas of our country, personal interaction with more than 45000 people, this exhibition narrates the stories, the history and depicts the culture of more than 150 tribes.

Their customs and their rituals… their arts, their dance and their centuries-old songs… their trade and their food… their aspirations and their happiness… their beliefs and their ancient wisdom… These and some never-before-known intricate aspects of their life will come alive in the minds of viewers as they traverse the gallery.

Think of this exhibition as a way of “introducing India to India.”